Someone up there mad at me?

After the week I had last week, I’m afraid to get out of bed today.
My week started with having a bride email me out of the blue and say they were cancelling their contract for their September wedding. No explanation whatsoever. Hmm. Ok.
Then, I find out that one of my credit cards was being cancelled. One that I’ve had forever and wasn’t behind on or even had a balance on. What the…?
After that, I find out that my oldest was contacted by her potential boss only to find out that she wasn’t getting the job she was promised after all, because the person that was going to leave decided not to quit. Oh my!
And after that, I have more problems dealing with weddings, like a bride scheduling her hair appointment so late that we will only have an hour to do 3 hours worth of photos. Or, another couple are still putting their details together when their wedding is right around the corner. Grrrr…
Oh, did I mention that my printer broke down right before a client was coming to sign a contract? !$#@&
If THAT wasn’t enough, on our way to shoot a wedding this Saturday, a deer jumped out in front of us and smashed the left side of my car…. 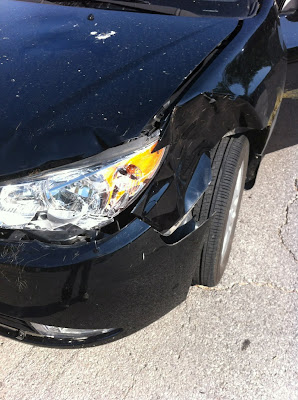 So, if you’ll excuse me, I’m going back under the covers until next Tuesday…

« Do you have a shoulder? » Like a first date