Emily had been wanting a kitten for some time now. My husband is not a cat person, so I had been trying to find a way to convince him to let her get one. Every time I would bring it up, he would change the subject.
I still had hope though, and checked out the paper and pet stores weekly for kittens. We thought that maybe if we just got one, he would just have to deal with it.
One day, while at the pet store, we came across some cute kittens. I chickened out and didn’t just buy one, but instead, we came home and brought it up to him. Surprisingly, he said “ok” and I about fell over. I asked why he changed his mind and he said that he might as well give in because he wouldn’t win anyway-smart guy.
So, we went back a couple of days later and they were all gone! My daughter was heartbroken. We had already bought all the supplies and food, but now no kitten. Then, we ended up finding this little guy. 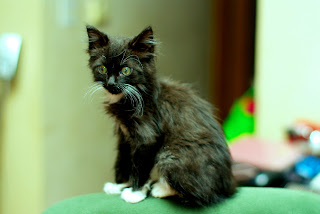 I wasn’t too thrilled getting a male, but he seemed pretty tame. 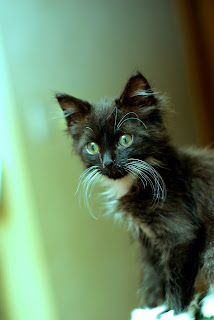 Emily named him Sam.
I, on the other hand, will be calling him
FARTHEAD.
I have never met a cat (or human) that farts as much as this 1/2 pound fluff ball. I have been forced to keep a can of air freshener on my desk for immediate use if needed. Now, the dog no longer gets blamed when that silent, but deadly, odor appears while the family is watching a movie in the family room. 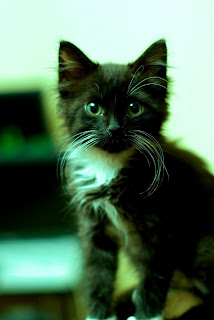 This dust bunny does.
Maybe I should have listened to my husband about cats.